Our ship next docked in precarious Ashdod, site of suicide bombings and a giant military cargo port, connected to the south by the rocket-battered Gaza strip.  Ashdod was an important Canaanite and Philistine city and mentioned in the Bible when the apostle Phillip preached there after baptizing the Ethiopian.  My friend and I decided to make our way down to the Dead Sea for the day, to soak in the healing mud and to experience the fabled waters.

Our trip was down, down, down and for the first time ever, my ears popped just like they would if I had been flying in a plane, but from the downward elevation as we ventured to the lowest point on earth.  The Dead Sea is one of the worlds saltiest bodies of water, and a natural health spa that supports no marine life. Face down swimming and splashing is strictly prohibited as severe damage to the eyes could result.  As I crept into the water, I found myself bobbing up and not able to stand – anyone who cannot swim would have no problem in the Dead Sea, since floating freely comes natural, and it is near impossible to go under.

I covered my body in the mineral rich mud and soaked for hours in the water and sun.  After our time there, we showered and changed and hung out at the lowest bar/restaurant in the world and enjoyed the late-year, warm, Middle Eastern weather. 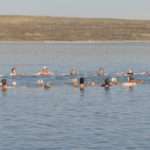 Floating in the Dead Sea. 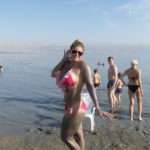 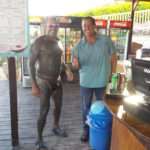 After returning to our ship at dark, we ventured back out and decided to catch a local bus down to Tel-Aviv.  We walked the city and made our way to a rooftop bar called SuraMare where we hung out and enjoyed incredible views of the Tel-Aviv skyline.  On our journey, no one spoke nor was anything written in English.  We had to catch taxis and encountered many people carrying rifles strapped to their backs in the increasingly sketchy city at night.  It was a bit intense and we arrived back very very late but the excitement was worth the adventure.

Where am I now?